How To Care For Dermestid Beetles 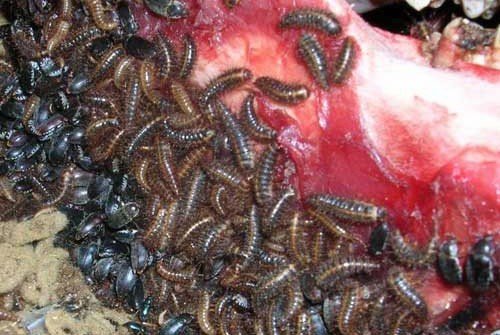 When You Buy Dermestid Beetles For Sale, The Adults & Larvae  Work To Clean Flesh From Skulls & Bones for Taxidermy Purposes. Your Dermestid Beetle Larvae are busy feeding on the flesh and hide as well as internal organs.

Buy Dermestids To Work at Cleaning until the Skull and Bones are completely bare.   Adult Beetles eat less but reproduce quickly.   Our Dermestid Beetles are at Work at top universities,  laboratories, museums and for taxidermy businesses and enthusiasts.

How To Care For Dermestid Beetles?

First, Choose a bin that will match the size of your beetle colony that you would like to have.   Dermestid Beetles are not climbers.  They can’t fly at all  (temperatures below 80°F). While having wings they will remain where they are.
Next, Add Air holes and screening.  Just cut out a hole in the lid and cover it with mesh material or screening.
Bedding: A few inches of substrate is used such as wood shavings or Shredded Paper material, A Good Bedding Substrate For Dermestid Beetles Care is our Wood Mulch material (Do not use Cedar) Use a few inches.  The beetles feel comfortable In the right wood shavings.  Our bedding is good for laying eggs in.
Egg cartons, foam pieces, and mattress stuffing material work good for pupating larvae and will help frass material build up and insulate the colony.

How Do You Care For Dermestid Beetles? – Living  Requirements

The required temperature for Dermestid Flesh Eating Beetles Care is 70-85°F they can live in temperatures that are cooler but will not multiply as rapidly. The Optimum Temperatures for greatest activity and reproduction will be in the range of 77-85°F
Use a heat mat.  Place the heat mat at a location that creates a gradient.  Leave one side cooler.  The Beetles will not overheat.   Beetles may be able to fly at or above 80 F though this will be easily contained.

Your Beetles will  be fed by you for 30-60 days before they are able to tackle projects like Cleaning Skulls or taxidermy projects.  Animal material should be given daily that can be consumed within 24 hours.
Do not overfeed it is important to only feed what can be consumed in 24 hours and adjust as they multiply.  As this is done over time the colony will develop into a voracious eating colony
In Off season Keep the Beetles Alive by feeding some dry kibble or cow ears.  Dermestid beetles will consume some moist meaty flesh also but prefer it a bit dry and jerky like.
Will dermestid beetles eat rotten meat?  Dermestid prefer fresh meat in nature and work before the maggots move in to eat the rotten meat.  Rotten meat mau kill your colony.

Some water is needed from time to time, however your bins should never remain wet or moist for more than 24 hours. With a spray bottle spray the substrate  every few days taking care to not use too much as water will attract mites   Sprayed water should be dry within 24 hours.
Use Insect Safe Water Crystals for Dermestids.  Water Crystals are better than other water sources. With water Gel there is less chance of drowning or attracting mites.  Buy Water Crystal Gel with your beetle order.

How To care For Dermestid Beetles

How to care for dermestid beetles Feed for 30-60 days.  Give smaller projects. Dermestid Beetles Care works better like this.  Build up to a large skull cleaning project. This prepares the colony to Work most effectively for you.
Purchase The Right Amount off Beetles.  This ensures that you will get the right amount to build up to Work to do the job intended.
For instance
To Clean a Rabbit Skull with Dermestid Beetles requires 4000 Beetles to effectively clean it.
Cleaning a Fox or Beaver Skull will take 8-9,000 Beetles to clean it.
To Clean a Deer Skull will need 25-30,000 Beetles
Cleaning a Bear Skull will need 45-55,000 Beetles
Customers Can Buy The Proper Amount of Beetles By Using The Guide Above.  Most Importantly Purchase The Right amount of Dermestid Beetles.
How To Clean A Skull With Dermestid Beetles
Leaving Too much meat Kills Beetle Colonies. Meat Should Be Fresh From The Freezer To Kill Any Pest Eggs. Rotting or molding may kill the beetles in your dermestid beetles enclosure.  Remove the eyes, brains and skin and as much meat as possible with a knife before giving to beetles. Purchase The Right amount of beetles.
Adult Dermestid Beetles Work at producing babies and concentrate on little else besides breeding and laying eggs.  The experienced hunter and taxidermist realizes that in the Dermestid Beetles Habitat the Larvae Work consuming the most flesh/meat from a carcass.

Our Dermestid Beetles are fed Prime Flesh.  Due to sanitary and shipping reasons our beetles are fed a dry diet consisting of dog food or cow ears ( Powdery substance in frass.) for a week or two before being shipped to you.  The juvenile larvae will consume this material for several weeks and during shipment.

Dermestid Beetles Care: Getting the Dermestid Colony Hot It may take up to 30 days of feeding slightly dry meat to get them used to meat again.  Feeding This Way Gets The Dermestid Colony “Hot” and Ready for Business.  This is one of the best most efficient ways how to care for dermestid beetles.

Above all, Dermestid Beetles Care is easy.  Customers can offer flesh on a regular basis. Smart Colony Owners Feed the amount of meat that the beetles easily eat in 24 hours. Slowly increase this over the course of 30-60 days before giving larger amounts or a carcass to Work with.