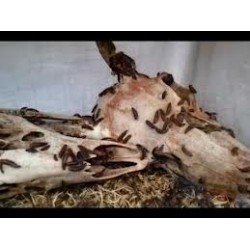 The answer is Yes! Being able to make beautiful trophy quality mounts with dermestid beetle taxidermy to accomplish skull cleaning for yourself, friends, family & customers will be a source of pride. You can make extra money By using Dermestid Beetle Taxidermy to clean skulls for mounts.

Perhaps you want to start a skull cleaning business. Maybe you just want to do your own skull or bone collection without having to deal with shipping your skulls to someone else. Maybe you are a hunter and want to clean your own trophy mounts for yourself. You can also prepare skulls for a few family members and close friends or group that you belong to. This will be the foundation of your money making business.

The most popular species of Dermestid Beetles used in flesh eating taxidermy are Dermestes Maculatus. They are commonly known as Hide Beetles. They also eat the hide and even feathers or fur. These are the Beetles that you will need to Clean Flesh from Skulls. These skulls are then used for quality mounts.

Dermestid Beetles are also used to Skeletonize Bones and do an effective job without using harsh and smelly chemicals.

Dermestid Beetles Work by cleaning the flesh from the inside and outside of the bones. They also clean the connective tissue on the inside as well as the outside. They can do this even in delicate bones like nasal bones or bones of small birds without causing damage. Proper methods will allow your skulls to be perfectly cleaned with no discoloration, shrinkage or damage.

Dermestid Beetles Care can be accomplished with a little planning. You will need a spare garage, shed, outbuilding or enclosed porch with heat and ventilation. Next you will need a container to act as your dermestarium to house and colonize the beetles. The Dermestid will colonize and live here in bedding that you choose. The bedding can be wood mulch shavings, cotton or shredded paper. They will also work at cleaning skulls in this space.

A thick plastic container with smooth sides will work as a dermestid beetles habitat. Many also use an old glass aquarium or old deep freeze chest unit. Just be sure to remove any silicone from any glass tank so the larvae can not escape by climbing the tacky silicone. You can also use a Super Slick Insect Barrier to Contain them in your dermestid colony container

Lastly you will need A Dermestid Beetle Colony. You can Buy a large amount of Dermestid Beetles (10-30,000) or more for a small startup cost of several hundred dollars. 600-2,000 . Start with a larger amount and you will find that they will work at cleaning large skulls like those of a deer pretty quickly. If you get a smaller colony you may need to patiently wait for them to colonize to a larger amount. Waiting for colonization of a small colony may be 4-6 months.

Dermestid Beetles will clean a skull without damaging delicate structures. You can then use a chemical to whiten the skull. The whitened skull can then be clear coated with a resin sealant. Now, Isn’t being able to clean a trophy mount worth getting the right amount of beetles to work most efficiently at cleaning skulls? 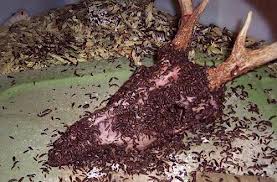 Yes! Now how much money can I make? Some of our clients that we have gotten started with Large Lots of Dermestid Beetle Colonies make up to 150.00 and more per skull by letting the Dermestid Beetles Work for them. If you want to try a small or larger skull cleaning business, it is easy to start with little investment. After receiving your beetles dump them into your container. Along with low start up cost, you will find the beetles do the work for you.

Genuine Real Dermestid Taxidermy Beetles, Where Is The Best Place To Buy Dermestid Beetles So They Can Start Working For Me Right Now?

Now, to Start Working with Dermestid Beetle Taxidermy, Work at obtaining as many beetles as you can afford. Buy More Dermestid Beetles to Boost your existing colony. If you do not currently have them get them from a source that keeps their beetles year round and not just during busy season. During this time ask yourself are any competitors of dermestid beetles taxidermy near me. There is plenty of business for everyone!

We sell our beetles to Universities, Labs, Museums, Zoos as well as Hunters and Taxidermists. Now, here is a place where the “More The Better” is key here. While you are expecting the arrival of the beetle colony you can begin to prepare. Prepare by getting a container that is just large enough to hold the largest project or skull you may have. Large “rubbermaid” type storage containers work well here. Chest freezers and old glass aquariums Work as well. Put your Dermestid bin in a heated area. You can also use heat pads, heat lamps or ceramic type heat emitters to keep beetles warm if they need extra heat.

Prepare your Dermestid Taxidermy Beetles by giving them flesh. You will find that each week they eat more and more. They will eat the same amount in a quicker time each week. They will also breed and lay eggs. This means that the amount of skulls you will be able to work with will increase exponentially each and every week. Start gathering a local market by collecting business from friends, family and those in your area. This will help you easily establish a loyal local customer base. Being able to earn an unlimited source of extra income with such a small investment can be profitable to try. By letting Dermestid Beetle Taxidermy Work for you is also very rewarding.

Are your Dermestid Beetles for sale near me?

We ship in The Continental U.S. as well as Alaska

How Are Your Dermestid Beetles Skull Cleaning Beetles Delivered?

We Ship USPS Priority and EXPRESS.

Are you a Dermestid Beetles Amazon Seller?

We sell direct to consumer with no middleman.